The main goal of the ParaCrawl project is to create the largest publicly available corpora by crawling hundreds of thousands of websites, using open source tools. As part of this effort, several open source components have been developed and integrated into the open-source tool Bitextor, a highly modular pipeline that allows harvesting parallel corpora from multilingual websites or from preexisting or historical web crawls such as Common Crawl or the one available as part of the Internet Archive. The processing pipeline consists of the steps: crawling, text extraction, document alignment, sentence alignment, and sentence pair filtering. The ACL paper describes these steps in detail and evaluates alternative methods empirically in terms of their impact on machine translation quality. Hunalign, Bleualign and Vecalign tools are evaluated for the sentence alignment step. Similarly, Zipporah, Bicleaner and LASER are evaluated for the sentence pair filtering step. Benchmarking data sets for these evaluations are also published. The released parallel corpora is also described in the paper and useful statistics are tabulated about the size of the corpora before and after cleaning for different languages. The quality and usefulness of the data is measured by training Transformer-Based machine translation models with Marian for five different languages. Improvements in BLEU scores are reported against models trained on WMT data sets. Furthermore, the energy cost consumption of running and maintaining such a computationally expensive pipeline is discussed and positive environmental impacts are highlighted. The paper aims to contribute to the further development of novel methods of better processing of raw parallel data and to neural machine translation training with noisy data especially for low resource languages.

Release 6 includes a new language pair English-Icelandic with a lot more data for many other languages. Restorative cleaning with Bifixer gets more data by improving sentence splitting, better data by applying fixes to wrong encoding, html issues, alphabet issues and typos and unique data not only identifying duplicates but also near duplicates. Improved Bicleaner models have also been applied to filter out noisy parallel sentences for this release.

This is the official release to be used in WMT20. Stay tuned for more news and follow us on twitter @ParaCrawl. 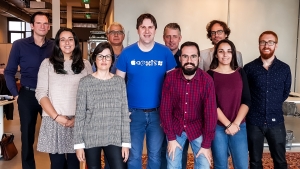 Published in News
Tagged under
Read more...
Broader/Continued Web-Scale Provision of Parallel Corpora for European Languages
© Copyright 2019. All rights reserved.
Any communication or publication related to the action, made by the beneficiaries jointly or individually in any form and using any means, shall indicate that it reflects only the author's view and that the Agency is not responsible for any use that may be made of the information it contains.